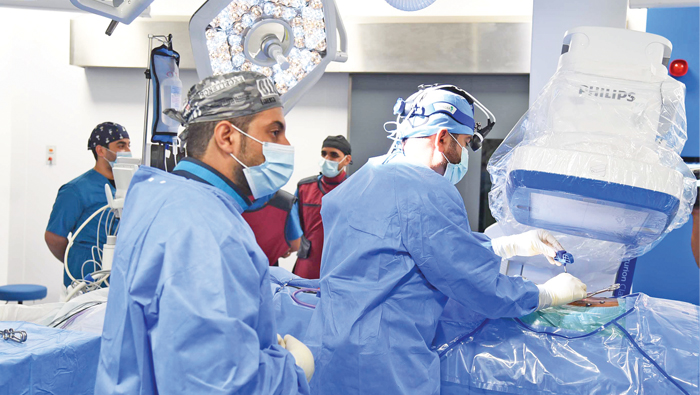 Technology is expected to play an important role in enabling surgeons to perform complex operations.

The Defense Ministry said: â€œThe operation was carried out by a medical team led by Colonel Doctor Ahmed Al Jahuri, senior consultant and head of the orthopedics department of the Armed Forces hospital, and medical staff from the armed forces. orthopedics, anesthesia, operations, radiology and medical engineering departments.

Speaking of the surgery which used advanced technology, Dr Al Jahuri said, â€œThe Armed Forces Hospital was able to use advanced augmented reality technology as a solution for the development of minimally invasive spine surgeries.

Dr Al Jahuri added, â€œIn this technique, low dose 3D CT scans are combined with optical imaging with stationary cameras, resulting in the creation of a three-dimensional augmented reality display of the patient’s internal anatomy. , and this combined image acts as an exploration device that guides the surgeon in fixing the vertebrae with surgical screws in place.

“This helps us to conduct a precisely defined surgery and reduces the risk of injury to nearby sensitive tissues such as nerves and blood vessels,” he continued. “” Following this approach leads to increased clinical precision because the surgeon can be sure that the surgical instruments are in the right place before the operation and this helps the physician to reduce surgical risks, medical errors, pain and loss of blood, which leads to a patient recovery and reduced hospitalization, as well as medical complications and subsequent costs.

Technology is expected to play an important role in enabling surgeons to perform complex operations, especially in the area of â€‹â€‹curvature of the spine. With the ability to tailor augmented reality to the surgeon’s needs, physicians can focus on what is happening right in front of them.

The technology also gives surgeons direct X-ray vision in anatomical areas that are not visible to the naked eye, making this new technology a mainstay of the future of surgery.

Ali bin Hamdan Al Ghafri, the patient who underwent the operation, said: â€œI suffered from pain in my spine, and after continuous examination at the armed forces hospital and necessary medical examinations, the results showed friction in some vertebrae in the spine. , and it was decided to perform surgery using augmented reality technology.

â€œI was informed of the details and steps of this procedure by the doctors involved in the operation, and what encouraged me to agree to perform the procedure was the presence of a reputable Omani medical team and efficiency, as well as what the Army Forces Hospital has in terms of modern advanced devices in the field of spinal surgery.

Praising the team who provided him with medical care, Al Ghafri also thanked His Majesty Sultan Haitham Bin Tarik for the attention given to the people of Oman.

Hanan bint Saif, who oversees the operating rooms at the hospital, said: â€œSpine operations are complex procedures that require the surgeon to be careful when treating the nerves and vessels connected to the spinal cord. spinal.

â€œAugmented reality technology is one of the latest technologies in spine surgery,â€ she added. â€œAround the world, many doctors have been able to perform this surgery using this technique. “