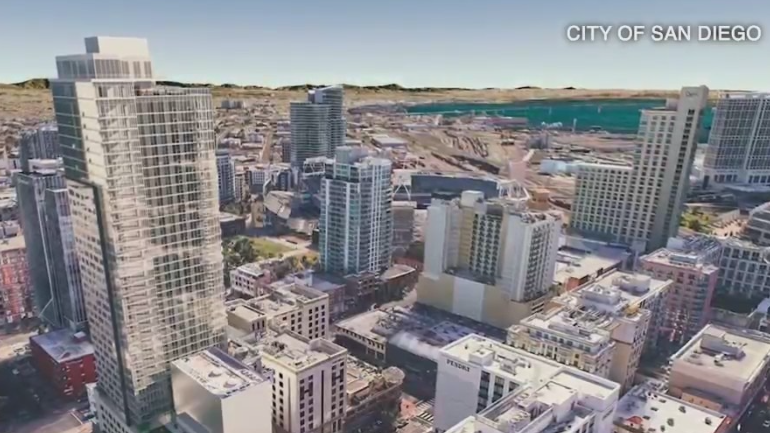 SAN DIEGO — The City of San Diego has approved a 37-story high-rise apartment complex in the East Village with limited parking spaces.

The new development focuses on tenants who might want to give up a car and instead use public transport or a bicycle.

“This project is really designed to really focus on the movement of bicycles and pedestrians,” said Brian Shoenfisch, deputy director of the City of San Diego’s Urban Division.

The project, known as 611 Island Avenue, will be home to Ballpark Self Storage and will include 443 residential units, ground floor retail space, a gym, lounges with barbecue grills, shaded structures, a synthetic lawn and landscaping.

SDPD investigates gun threats made at Taft High School in Serra Mesa; “no active threat”, according to the police

The complex will only have 52 parking spaces and a bicycle storage room that can store 212 bicycles, accommodating those who do not own a vehicle and mainly use public transport.

Shoenfisch says this new development aligns with policies recently adopted by the city.

“Given recent and ongoing investments in infrastructure, including cycle paths and greenways, which encourage people to get out of their cars and walk and cycle and take public transport,” said he declared.

The new development has nearby businesses like West Brew, excited to bring new customers to the area.

The complex will include affordable housing, using the city’s micro-unit density program.

Popeyes is offering a 59 cent chicken for its 50th anniversary

“We are thrilled to help the city achieve its housing and climate action plan goals with a transit-focused workforce housing solution that preserves a historic resource and incorporates affordable units,” said Deana Ellis, vice president of Cresleigh Homes, the developer of the project. .

There is a 10-day appeal period, allowing residents to appeal project approval. Once this period is over, the city will approve the developer for the permit.

It is currently unknown when construction will begin or when the complex will be completed.