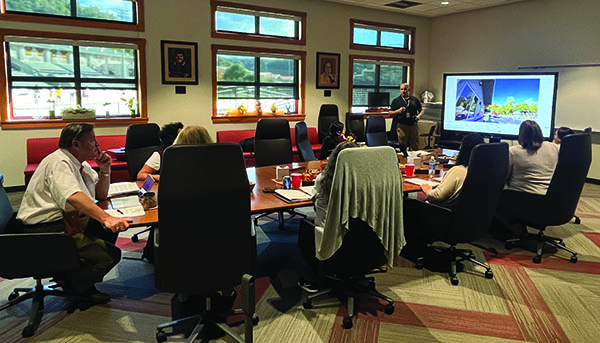 Report of a feather

The Cherokee Central Schools School Board met on Monday, October 3, and their only guest was Security Network Administrator Brett Robertson.

Robertson was there to detail the new security system that has been implemented on the Cherokee Central Schools (CCS) campus. I brought one of the cameras to pass around the Council members and showed them a demonstration of what the recording equipment looks like.

“I’m here to show off our new body camera solution that our security guards currently wear throughout the day. It’s an access camera. It goes with our system that we currently have. All of our cameras on the campuses are access cameras,” Robertson said.

He went on to say that they currently have eight cameras that are rotating and can be swapped between officers. He said they looked at several hardware and software items from the past year and a half before making a final decision on this solution. He said the cameras are reasonably priced replaceable and the software is really the most expensive aspect of the technology.

Following Robertson’s presentation, Council addressed the remaining items on the agenda. The board voted to approve a medical leave for one of its employees after writing a letter to the board for review. Chair Jennifer Thompson said the board had approved similar requests in the past.

The board approved a donation to a student but gave no insight into the situation.

“The only other thing is due to confidentiality and privacy, we have discussed a topic before, and we just need a vote. I will accept a motion to approve $250 to an undisclosed student” said President Thompson.

The Consent Agenda was also adopted unanimously, and it proposed the following:

The next meeting of the CCS Board of Trustees is scheduled for Monday, October 17 at 4:45 p.m. Meetings are being held at the administrative offices of the Cherokee Central Schools. These meetings are open to the public unless an executive meeting is called.

Is Employee Social Media Use Linked to Cybersecurity Threats?