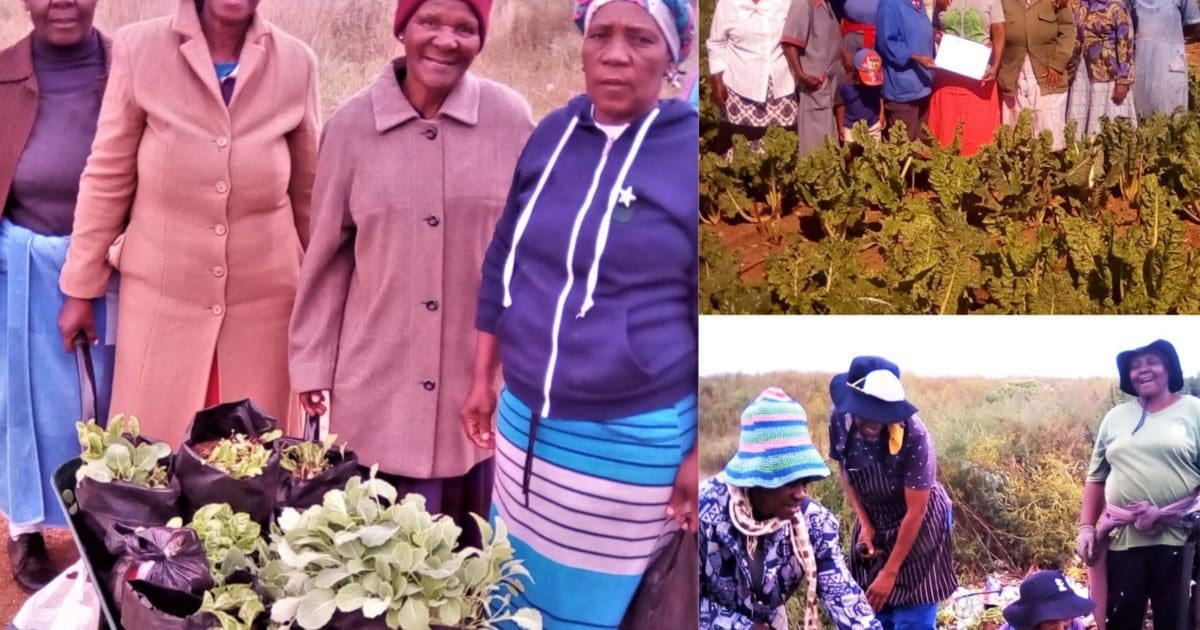 In Gauteng Township in Sebokeng, young people not only use a small portion of land to feed their community, but also to turn painful memories into good ones. The changemaker group of Vaal Youth Antivirus, a non-profit organization, has had remarkable success on a former landfill.

Sebokeng, near Vanderbijlpark, is divided into 21 zones. It was in zone 14 that the participants grew a cover of agricultural crops where once blood flowed. The landfill site was once a hotspot for violent attacks and thefts. This is also where, a few years ago, a child was found dead after falling into an open pit.

These challenges prompted them to start cleaning up the landfill.

“We decided to join together as young people so that things like this never happen again,” project communications manager Binele Motloung told Food For Mzansi. “However, we thought later, ‘What will happen after the site is cleaned up? What would stop such bad things from happening again? “

The solution, he said, was an agricultural park on just seven hectares.

Without permission from the local municipality to use the landfill, the members of Vaal Youth Antivirus nonetheless slowly but surely turned it into a vegetable garden.

Their goal, Motloung explains, was also to develop the township’s economy. “We are in a neighborhood where the unemployment rate is high. We therefore believe that agriculture is important in the fight against unemployment and poverty.

After creating a vegetable garden in 2018 and finally gaining buy-in from the local municipality, Motloung and his friends decided to come up with an agricultural program that would attract young people.

They struggled, however. “Young people were not interested in agriculture. They were skeptical of joining us. That’s when we decided to find role models who could inspire young people.

Members of the new Mothers in Agriculture project have been sent for agricultural training. According to Motloung, the women’s group was an inspiration to Sebokeng’s youth.

Recently, AgriSETA partnered with them by sponsoring the continuing education of 15 of its young members. This is to broaden their knowledge of the agricultural sector in the hope that they will in turn train others in Sebokeng.

Soon the young people will also be cultivating their plot of land alongside the women’s group, Motloung says.

The food that is currently cultivated is donated to the Thusong Project feeding program. This program aims to help community members who have difficulty accessing food and are dependent on social grants.

“One of our biggest contributors usually comes and gives baskets to low-income households. We give them these vegetables for food. Some of the vegetables, a small part, go to the mothers who look after the garden.

According to Motloung, community members have embraced the agricultural initiative. Others, however, still try to provoke division because of their personal interests.

“But they’re not really a problem. They get used to the idea and see what we’re trying to do. It is not discouraging but encouraging. It shows us that there is a purpose in what we do, ”says Motloung.

Their goal is to expand the small agricultural park to create local jobs. “In the near future, we also want to be able to supply local and other markets around Sebokeng. “

But a lot of work still awaits the association led by young people.

“Currently, we are working on a voluntary basis. An administrative budget is needed – and allowances for our young people who are determined to learn and grow the community through agricultural projects.

ALSO READ: “A school of refuge in the middle of Covid-19”

Get stories of change: Inspirational stories from the people who feed Mzansi.

A new solution to the problem of plastic pollution