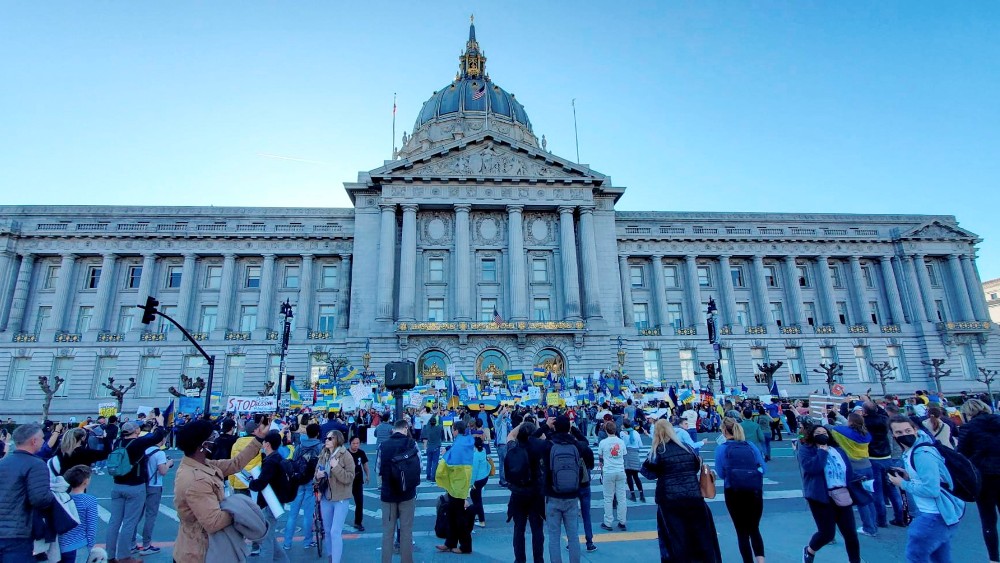 Ukrainians working at California tech companies are banding together to help their beleaguered homeland, aiming to bring down disinformation websites, encourage Russians to turn against their government and speed up the delivery of medical supplies.

They are seeking, through email campaigns and online petitions, to persuade companies such as internet security firm Cloudflare, Google and Amazon to do more to counter the Russian invasion of Ukraine.

“Companies should try to isolate Russia as much as possible, as soon as possible,” said Olexiy Oryeshko, a software engineer at Google and a Ukrainian American. “Sanctions are not enough.”

He was one of nine tech activists interviewed by Reuters who are of Ukrainian descent or are Ukrainian immigrants and are responding to a call from Kyiv to form a volunteer “IT army”.

Many companies have severed ties with Russia due to new trade restrictions imposed by the government, but activists are calling for more.

They are appealing to cybersecurity companies in particular, asking them to ditch Russian customers, especially publishers of what they say is misinformation. If this happened, publishers would be more vulnerable to online attacks.

“Given that even Switzerland took sides, I think it would be a significant statement if Cloudflare did the same,” he wrote in an email to the executives, which he shared with Reuters.

Cloudflare said it terminated some customers due to sanctions and began reviewing accounts flagged in Seletskiy’s email, adding that it was proceeding with caution because cutting ties would jeopardize customer safety.

Spurred on by bombs that exploded outside his parents’ house last week and concerned for the safety of some of his Ukrainian colleagues who had not recently checked in, Vlad Goloshuk called on a range of companies to put pressure on Russia.

More than a dozen, including security and web hosting providers, said they would do what they could. Some have abandoned Russian clients or were considering doing so, according to responses provided to Reuters by Goloshuk, CEO of Brightest Minds, a company that helps companies generate leads.

Philipp Lypniakov, who works for Spanish delivery app Glovo and has backed efforts to take down Russian websites, said he hoped “computer warfare” would protect Ukraine.

The disruptions will send “a message, from average citizens to senior officials, ‘Hey, this is unacceptable,'” he said.

At Google, workers, including hundreds of Ukrainian heirs, signed an internal letter to CEO Sundar Pichai calling on the search giant to provide more aid to Ukraine and to modify its services such as Maps and advertising tools, according to a company software engineer who spoke on condition of anonymity.

Google declined to comment. In recent days, he banned Russian state media from accessing advertising and distribution tools and tightened security measures for users in Ukraine.

Activists are also looking for ways to disrupt the lives of Russian civilians, in an effort to weaken support for the war in Russia.

An online petition organized by Stas Matviyenko, CEO of restaurant ordering company Allset in Los Angeles, has called on US developers of entertainment, payment, dating and other apps to block access in Russia.

Silicon Valley-based aid group Nova Ukraine has urged Amazon to give workers time as well as space for bandages and other essential supplies on its cargo planes and vehicles bound for neighboring countries. such as Poland.

“They have the scale that no one else has,” said Igor Markov, director of Nova Ukraine and technology researcher.

Amazon declined to comment. This week he announced he would donate up to $10 million to organizations providing support in Ukraine.

“I’ve only opened my work computer three times since last Wednesday,” she said. “To let my manager know that I will be away and to use the matching donations.”