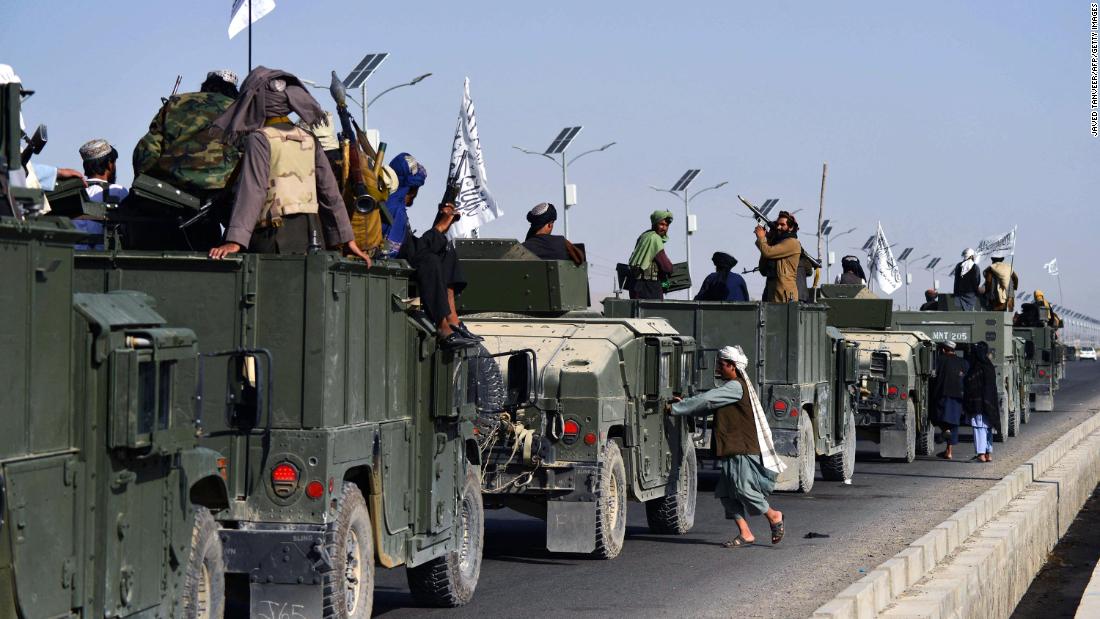 This praise was also accompanied by a wave of anti-refugee sentiments from far-right groups, as the United States and others rushed to evacuate tens of thousands of people from Afghanistan. before the August 31 deadline set by the Biden administration.

Several worrying trends have emerged in recent weeks on online platforms commonly used by anti-government, white supremacist and other domestic violent extremist groups, including “portraying the activities of the Taliban as a success” and a role model for those who believe in the necessity. For a civil war in the United States, the head of the office of intelligence and analysis of the Department of Homeland Security, John Cohen, said on Friday during a call with local and state law enforcement, obtained by CNN.

Cohen said during the call that DHS had also analyzed discussions centered on “the great replacement concept,” a conspiracy theory that immigrants, in this case the relocation of Afghans to the United States, would lead to a loss of control and authority of white Americans.

“It is feared that these accounts may incite violent activities directed against immigrant communities, certain religious communities or even those who are relocated to the United States,” he added.

Far-right communities have been reinvigorated by events in Afghanistan, “whether by their desire to emulate the Taliban or by increasingly violent rhetoric about ‘invasions’ by displaced Afghans,” according to an analysis recent from the SITE Intelligence Group, an American non-governmental organization that tracks the online activity of white supremacist and jihadist organizations.

Some people hail the Taliban’s seizure of power as “a lesson in love for the homeland, for freedom and for religion,” SITE said in its weekly newsletter on far-right extremists.

Neo-Nazis and violent accelerationists – who hope to provoke what they see as an inevitable race war, which would lead to an exclusively white state – in North America and Europe praise the Taliban for their anti-Semitism, homophobia and severe restrictions women’s freedom, SITE noted.

For example, a quote from the Proud Boy to Fascist Pipeline Telegram, said: “These farmers and poorly trained men fought to take back their nation from globohomo. They took back their government, made their national religion into law. and executed dissidents … If white men in the west had the same courage as the Taliban, we would not be currently ruled by Jews, ”SITE said.

“Globohomo” is a derogatory word used to insult “globalists,” a term used by conspiracy promoters to describe their enemy (the evil global elite who control the media, finance, the political system, etc.), according to the SITE.

For months, US officials have warned that domestic violent extremism is the greatest threat to the homeland, citing the January 6 attack on the United States Capitol as a stark illustration of the potential for violence that can arise when conspiracy theories and false narratives are flourishing.
A significant portion of today’s threat environment comes from individuals who are influenced by what they see online, Cohen told CNN in an interview last month.

At present, the Anti-Defamation League Center on Extremism sees no credible threats observed or mobilization of extremist activity online, but is concerned that the current rhetoric online may highlight ideological concerns. and possible threats to public safety, said Joanna Mendelson, managing partner of the center.

Extremists often take current events and weave them into their own narrative and worldview, Mendelson said, which is happening in the aftermath of the withdrawal from Afghanistan and amid the humanitarian and military crisis.

There has been a lot of Islamophobia and xenophobia taken up by white supremacists and anti-Muslim activists, claiming that public and national security is threatened because they see refugees through a stereotypical lens as dangerous criminals or terrorists, according to Mendelson.

A fundamental conspiracy guiding white supremacist ideology is the “great replacement,” the belief that ultimately the white race faces its ultimate extinction, she said.

There’s also “almost that infatuation and admiration” of the Taliban, Mendelson said, stressing the idea that a group of under-equipped insurgents could successfully defeat a world power.

“The fact that ultimately the Taliban can claim victory over such a world power is something white supremacists are taking note of,” she said.

The first narrative to emerge among far-right groups was of “rejoicing at the humiliation” of the US withdrawal from Afghanistan as images of Taliban fighters seized city after city, as well as American equipment. left behind, Squire said, both celebrations of defeat and feelings of humiliation as Americans.

When you delve deeper into neo-Nazi groups, you see a certain celebration of the Taliban, usually linked to extremely misogynistic or extremely anti-Semitic discussions, she added.

This kind of ideological cross-over praise has historical precedent, according to Squire, citing as an example a meme that circulated in neo-Nazi communities during a particularly misogynistic period about “white sharia,” the concept that women should be. treated the way the Taliban treat women.

There have been recent examples of right-wing groups supporting movements abroad that seem ideologically distant. For example, earlier this summer, online forums supporting QAnon and Donald Trump celebrated the deadly military coup in Myanmar and suggested that the same should happen in the United States so that Trump can be reinstated as as president. CNN also spoke to supporters of the former president in Ventura, Calif., In February, who said they wanted to see a coup in Burma happen here.

However, the most common narrative revolves around the idea that the United States is “importing the Taliban” through Afghan resettlement and that Afghan refugees are too different to be true citizens, according to Squire.

“It’s really an anti-Muslim idea, an anti-immigration idea,” she said.

The Pentagon announced Monday that the last US military planes had left Afghanistan, after weeks of chaotic and deadly evacuation efforts that were punctuated by last Thursday’s devastating suicide bombing that left more than 170 dead, in addition to the 13 US servicemen who were also killed.
Some of the stories from Afghanistan focus on ‘the Taliban did it right’ and that this should be a ‘lesson learned’ about how we should operate in the United States, an official told CNN US law enforcement about the rapid rise of the Taliban as the United States withdrew its troops.

“This worries us a bit,” because it suggests an escalation of violence, the official added. For example, reference was made to the fact that only 80,000 Taliban were able to defeat an Afghan army of several hundred thousand backed by the United States, the official said.

In February, Afghan forces numbered 308,000, according to a United Nations Security Council report released in June – well above the estimated number of armed Taliban fighters, which ranged from 58,000 to 100,000, CNN previously reported. . Although the number of Afghan forces was considered by many to be inflated.

“There are important discussions,” in which people express their support for what the Taliban has done and see it as an example of what anti-government extremists should do in the United States, the official said, adding that the reaction was “somewhat surprising”.

In Europe and the United States, there has also been a “wave” of anti-refugee commentary from white nationalists and neo-Nazis in reaction to the Taliban takeover, SITE found.

Comments on the anonymous forums were particularly violent, according to SITE, which found users discussing taking up arms and, in one case, threatening to attack refugee aid organizations in Florida.

The hateful rhetoric is similar to that seen amid waves of Libyan and Syrian refugees in the 2010s, which paved the way for violent terrorist attacks in Christchurch and Pittsburgh, according to SITE.

Amid anti-immigrant sentiment, DHS officials wonder if Afghans themselves will be targeted once they land in the United States and are resettled here, a DHS official told CNN.

“Will they be the potential target? Will the Afghans themselves become targets? the official said, noting the concern.

China strengthens its relations with Asean